calling for the release of Burmese political prisoners. 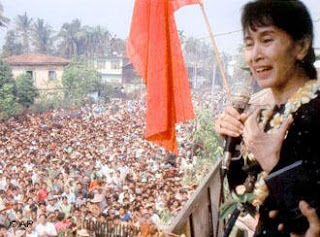 I just joined a global movement to free Burmese democracy leader and Nobel Peace prize winner, Aung San Suu Kyi and 2,100 other political prisoners and I thought that you would want to get involved.

The only crime Aung San Suu Kyi and her fellow prisoners have committed was to peacefully call for democracy. Days before she was due to be released after 13 years of detention, the brutal regime has locked up again on trumped up charges. She is seriously ill, but the brutal military regime wants to keep her under lock and key so that she cannot challenge them in next year's elections.

The petition is calling on the UN Secretary General to act now -- he can require the prisoners release as a condition of renewed international engagement. The petition will be presented on May 26th by brave Burmese democracy activists -- so we have just 6 days to build a massive global movement. Click on the link to sign the petition and send this email on to friends and family!

For more information read the full alert below. 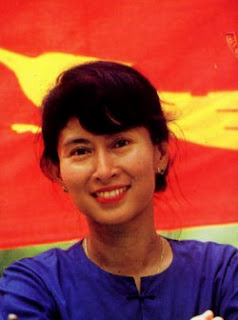 Burma's democracy leader and Nobel Peace prize winner, Aung San Suu Kyi, has been locked up on new trumped up charges, just days before her 13 years of detention was due to expire. She and thousands of fellow monks and students have been imprisoned for bravely challenging the brutal military regime with peaceful calls for democracy.

Risking danger to speak out for their jailed friends, Burmese activists are demanding the release of Aung San Suu Kyi and all political prisoners and calling on the world to help. We have six days to get a flood of petition signatures to UN Secretary-General Ban Ki Moon calling on him to make their release a top priority -- he can make it a condition of any renewed international engagement. Follow the link to sign the petition, and forward this email on to friends to ensure Aung San Suu Kyi and all political prisoners are freed. Burmese activists will present the global petition to the media on May 26th:

On May 14th, Aung San Suu Kyi was arrested and sent to jail to charged in connection with an American man who allegedly sneaked uninvited into the compound where she is being held in Yangon. The charges are absurd -- it is the Burmese military, now charging her with breach of house arrest, that are responsible for the security of the compound. They area pretext to keep her detained until after elections which are set for 2010.

The Burmese regime is renown for its vicious repression of any threat to full military control - thousands are in jail in inhumane conditions and denied any medical care, there are ongoing abuses of human rights, there is violent repression of ethnic groups, and over a million have been forced into refuge across the border.

Aung San Suu Kyi's is the greatest threat to the junta's hold on power. Her moral leadership of the democracy movement and the legacy of her landslide victory in 1990 elections means that she is the only figure who could face down the military in elections next year. She has been detained over and over again since 1988 -- under house arrest and allowed no contact with the outside world. But this scandalous new detention in the notorious Insein Prison without medical care could be very dangerous because she is seriously ill.

Sources say that the military regime is fearful of this unified and massive online call to the UN -- over 160 Burma exile and solidarity groups in 24 countries are participating in the campaign. And the Secretary General and key regional players that are looking to re-engage with the Burmese regime, can influence the fate of these prisoners. Last week Secretary General Ban Ki Moon said: 'Aung San Suu Kyi and all those that have a contribution to make to the future of their country must be free'. Let's overwhelm him with a global call to urgently act on his words and stop the arrests and brutality:

As with the release of Nelson Mandela from years of prison in South Africa, the freedom of Aung San Suu Kyi from years of unjust detention, will bring a new beginning to Burma and hope for democracy. This week could be that historical time for change - let's stand united behind Suu Kyi and these brave men and women and demand their release now!

A Letter from former Presidents for the release of political prisoners:
http://www.burmacampaign.org.uk/index.php/burma/news/Letter-from-112-Former-Presidents-and-Prime-Ministers-to-UN-

For the full statement from the UN Sectretary General on Aung San Suu Kyi's arrest:
http://www.un.org/apps/sg/sgstats.asp?nid=3848
Posted by Superman Can't Fly at Wednesday, May 20, 2009