Former academician and PKR state deputy leader 58-year-old Mansor Othman will be the party candidate for the Penanti by-election next month.

This was announced by PKR de facto leader Anwar Ibrahim to a crowd of more than 1,000 people packed into Yayasan Aman, Penanti last night. 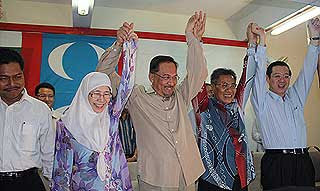 In the aftermath of the March 2008 political tsunami Malaysians have gone back to the polls five times. In four elections they have voted overwhelmingly in favour of Pakatan Rakyat and in the fifth, but for the influence of money politics and electoral fraud, demonstrated a growing preference for change and for a new style of politics.

The message is clear. The Malaysian people are eager to turn the page on Umno-led BN rule. They have embraced Pakatan Rakyat’s message of unity and are inspired by our commitment to eradicating corruption and addressing the needs of the poor and marginalized, particularly among the Malays and bumiputeras of Sabah and Sarawak.

I am pleased to announce KEADILAN’s candidate for the May 31st by election for the State seat of Penanti in Penang. En. Mansor bin Othman is KEADILAN’s Division Chief for Balik Pulau and Deputy State Chief of KEADILAN Penang. He has served on KEADILAN’s Supreme Council for over ten years and also served as the national Deputy Director of Elections. In addition, he served me honorably and with distinction as Political Secretary to the Deputy Prime Minister of Malaysia from 1996-1998.

Mansor has contributed immensely to the development of Penang and is ready to serve the people of Penanti from day one in office.

He earned a masters degree from USM and a Masters in Arts and a Masters of Philosophy from Yale University. He was an associate professor at USM and was also the Director of the Center for Policy Research.

Having served in the Committee for Community Education and the Committee for Youth Development Programs, he has contributed to improving both education and youth programs in Penang. As an Exco member of PEMADAM Penang, he worked tirelessly to raise awareness about drug abuse and the prevention of drug addiction. Mansor was also actively involved in the development of bumiputera entrepreneurs, notably through his role with TEKUN, a program designed to improve skills of businessmen in small and medium enterprises by providing them with microcredit facilities.

I would like to thank CM Lim Guan Eng immensely for joining us tonight and for his continued support of the Pakatan agenda. On behalf of KEADILAN I look forward to continued cooperation with DAP and PAS in the coming election. Their contributions have been instrumental in the previous by-election victories and have demonstrated the growing strength and cohesiveness of this coalition.